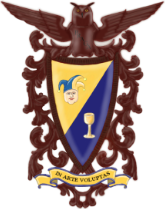 Schlaraffia was founded in 1859 in Prague (Czech Republic) which at that time was part of the Austrian-Hungarian monarchy. The driving factor behind its roots was the wide spread intolerance of the 19. century. A distinguished art club in the city whose members also included nobilities of the Habsburg royal court regularly prohibited a well known performing artist of the Prague German Theater joining the club as a member. His other fellow German artists regarded this as a high-handed act of arrogance and snobbery of the upper class and formed in protest their own artists round-table. Schlaraffia was born, and by the way, the name has no meaning! Schlaraffia is a timeless playing field for men, who care for friendship and engage with subtle humor in the arts in a broad sense. Within a play full of satire, they mock the snobbism and mannerisms of the royal court, and most important, make fun of themselves.

In 1914, before the start of the First World War, Schlaraffia had grown to 197 chapters mostly in Germany and Austria, but also in North-America (with chapters in San Francisco, Milwaukee, New York, Chicago, Newark, Cincinnati, Philadelphia, Jersey City, Cleveland, New Haven, Boston, Clifton, Buffalo, Washington, and Denver), and other European countries around German speaking artists and communities. Schlaraffia had developed into an international society with broad recognition and was growing fast. The war changed this bright picture. Many chapters in post war Europe but also abroad closed due to political reasons, the first time Schlaraffia had to pay tribute to the political environment.

Nevertheless, the ideals of Schlaraffia defied the politics and the society grew by over 100 new chapters between 1919 and 1937, mainly in Germany and the new Eastern European countries. However, in 1937 Schlaraffia suffered a major blow to its existence, when Hitler ordered the closing and dissolution of all Schlaraffia chapters in Germany and Austria. Only the chapters in Switzerland, North- and South-America were still in existence and meeting regularly.

After the war Schlaraffia members in Eastern Europe had to meet secretly because Schlaraffia was outlawed by the communists. Also in the United States Schlaraffia was looked upon with suspicion from time to time, when many a politician viewed US citizens of German descent with mistrust. All this was unfounded and proved to be total nonsense. Schlaraffia has no goals, it is not a lodge or brotherhood with a hidden agenda. Schlaraffia is an idealistic society based on friendship and tolerance. The members have a strong belief in the mutual Give and Take. They don’t care where and to whom you pray, what profession you have or what political beliefs you have. Envy and rivalry have no place in Schlaraffia. Humor and the appreciation of the arts are essential values. While in the beginning most of Schlaraffia’s members were artists, you will find today besides singers, actors or painters also engineers, inventors, factory workers and teachers, all together pretending to be the last knights of a long gone romantic period. They don’t take everything and in particular themselves too seriously, and are constantly willing to promote each other’s friendship with the joy for the arts and subtle humor.

Therefore, it is not surprising, that Schlaraffia’s ideals and values have prevented its extinction during hard times. It resurrected from the rubble of the second world war with a resolved new strength and today, 160 years after its birth, is as young and lively as before. The umbrella organization ‘Allschlaraffia’, under which all the chapters today are organized, has its headquarters in Berne, Switzerland. There are 5 regional federations (Germany, Austria, Switzerland, North- and South-America), who are represented by 3 delegates each at the board of Allschlaraffia. Today there are 265 chapters worldwide with about 10,000 members. The North-America federation has 27 chapters with 520 active members. Worldwide, German is the language spoken, however, the members need not to be Germans. They need to speak and understand the German language well enough to follow the conversations during the meetings.

Finally, one peculiarity of Schlaraffia needs to be mentioned : The embodiment for wisdom, humor and Schlaraffia’s values is the eagle owl (Bubo bubo). Right at the entrance of each meeting place stands a stuffed specimen or carved statue of an eagle owl as the symbol of Schlaraffia. Before the members enter the meeting place they bow to this symbol. But be sure, they are not praying to an owl, they are not worshipping a stuffed bird. They bow before entering their friends’ playing sphere and the desire of all the others present for a meeting full of joy amongst friends. With a winking eye, they say: I am ready, let’s play!